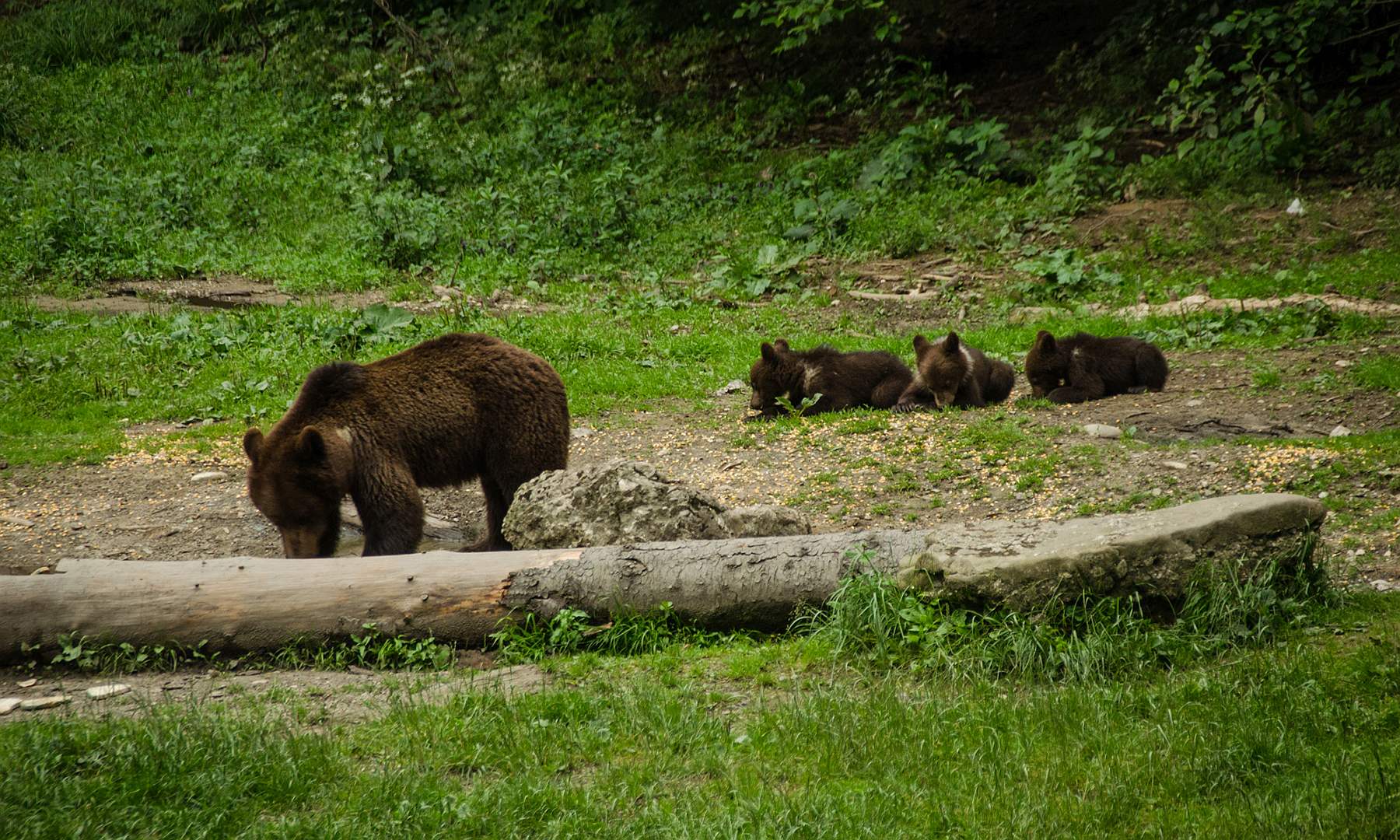 Let’s start by saying that brown bears represent only one of the 8 species of bears in the world:

The bears we see in Romania are a subspecies of brown bears, specifically the Eurasian Brown Bear (Ursus Arctos Arctos)

If you don’t like reading all the text, feel free to download and use this infographic (but point to this website if you plan to use it online):

Although listed as “least concern” on the IUCN Red List (2016), and with a population trend estimated as “stable”, the brown bears are already extinct in a big part of Europe, as we can see on the map from IUCN (International Union for Conservation of Nature). However, as stated by IUCN, “there are many small, isolated subpopulations that are in jeopardy of extirpation”. We can list areas in Europe where brown bears are basically extinct or nearly extinct, but an image is worth 1000 words:

In Europe, bears live in forests (mainly mountain forests in Romania), shrublands, grassland, wetlands (inland), rocky areas. In rare cases, they would go to the lowlands in search of food.

How big are the Eurasian Brown Bears?

The bears in the Carpathian mountains are a bit smaller than their relatives in North America, the Grizzly bears. They can reach heights of 1.2 meters and a length of over 2 meters. However, when standing on their hind legs they can be quite impressive, reaching over 2 meters. Males can reach 250 – 300 kg, while females are much smaller.

The mating period for brown bears is after their torpor, which is May-June. The gestation period is 180-270 days and females will usually give birth during winter. They normally have 1-2 cubs, sometimes 3 cubs, that stay with their mom for almost 2 years. Cubs are blind, toothless and very small, only 500 g when they are born. However, due to very the reach milk of their mother, they grow fast and around April they can leave the den.

Yes and no. Although their natural behaviour is to avoid each other, as long there is plenty of food for every individual, these animals will tolerate even the bigger representatives and sometimes, even other species. The biggest number we have seen so far during our bear-viewing tours is 16. Yes, sixteen bears in one 2 hour visit! And at the same time, 11 – eleven – bears feeding happily. During mating season (from mid-May to mid-June), they are a bit more aggressive and cautious, especially the younger males, which are always trying to court females. Unfortunately for them, the bigger and more dominant males do have priority. Mother bears are also very cautious, but also can be very aggressive, especially when they have cubs around, which is in the first two years after they are born. The males will always try to kill the cubs so… stay away from bear cubs, even though they look friendly.

What do brown bears eat?

Although the brown bears are considered to be the largest carnivores in Europe, their main diet consists of forest fruits, plants, grass, nuts, worms, ants, termites, insects and also other animals, if available. So we can say they are omnivorous. They are at the top of the food chain so they don’t have any predators. Their only threat … you guessed it, are people.

Unfortunately, humans threatened their habitat by expanding too much into the forests (for housing & urban areas, commercial & industrial areas, agriculture: crops, livestock farming, energy production) and hunting them for trophies. Intensive deforestation also threatens to isolate them into smaller and smaller patches of forests. But fortunately, by organizing bear watching activities, people learnt to protect and respect these animals.

As we can see in the map above, Romania is one of the few places in Europe (apart from Russia) with a constant population of bears. Romania’s Carpathian Mountains are home to over half of Europe’s population of brown bears (Ursus Arctos Arctos). Why there are so many bears in Romania? Partly due to less pressure and deforestation during the communist regime, partly due to the communist dictator Nicolae Ceausescu hunting parties (for which he needed a healthy and stable population of bears). But also due to groups of enthusiasts that are trying to protect this magnificent animal. Fortunately, you can see the brown bears in the wild, in their natural habitat, in wildlife tracking tours.

How many bears are there in Romania?

Here we reach a very sensitive topic. Let’s start by saying that the most commonly accepted number is 6000 bears. But the estimations have a big variation, from 8000+, estimated by hunting organizations, to no more than 3000 estimated by environmentalists. We tend to believe that numbers given by nature protection associations and nature conservationists are closer to reality for the simple fact that, as they explained, counting can be flawed or biased. The old way of counting bears, by counting the traces, is not correct because, as we know, bears can travel a long distance while looking for food and one can count traces near Brasov or 50 km away as two different bears, while in fact, it was only one individual. The best counting, but far more difficult and expensive is by DNA traces. The advantage of this is not only that the counting is correct, but it provides a lot more information about brown bears population.

How to act if you encounter a bear?

Brow bears are shy animals and they generally tend to avoid people and stay away from trouble. While hiking in the mountains is best to try to avoid meeting the bears. So you hike in a bear-populated area, talk to each other, try to make a bit of noise, so the bears will know you are there and keep a distance. We happened to see bears while hiking in Bucegi mountains, it was a cub and luckily it was a long distance. As much as we wanted to go closer and take pictures we thought it’s best to wait and let him pass (his mom was probably not far). If you do happen to meet a bear, one thing is to move away slowly. Don’t try to run, as this might trigger their hunting instinct. The old idea of “playing dead” doesn’t seem to work either. Maybe…try to pray, if you are religious 😉
Seriously now, some say it works to give the bear a  can or a pack of something. While it will be curious checking it out, move away slowly.